An eight-acre residential site on Newtown Creek, right next to Hunters Point South, is hitting the sales market — and can be developed with four, 400-foot-high towers totaling 1.6 million square feet.

The family has hired the Newmark Knight Frank team of Jimmy “King” Kuhn, Jennifer Schwartzman and David Noonan to market the property as either a full sale or long-term lease, which is often done for tax reasons.

Long Island City land had been selling outright for about $300 a square foot, so in theory the site could fetch $480 million — if it was targeted to market-rate condominiums.

That’s because if a developer wants any tax abatements, the value goes down the tubes. If built with rentals, the current Affordable New York zoning requires as many as a third of the apartments be rented to lower-income families, and waterfront properties even have special rules requiring higher-priced labor.

At a guesstimate of 500 square feet to 700 square feet per apartment, the site could hold just over 2,000 units, after accounting for common areas and mechanicals.

Owned by a family for generations, the sprawling, elongated triangular site at 55-01 Second St. is also bounded by 54th Avenue to the north and Vernon Boulevard to the east. The current low-rise industrial buildings will be delivered vacant.

“I can make argument that land on average is trading for $300 a buildable foot, but any time you have something of this size, it goes for below market,” said Daniel Wechsler, director of Ariel Property Advisors, who is not involved with the site. “If the city gets involved, they will want even more and have it tie into its own Hunters Point project.”

TF Cornerstone was selected to develop the city’s peninsula just to the west as the second phase of its Hunters Point project.

New Target to replace Toys ‘R’ Us in Brooklyn

Brooklyn’s tallest office building, One Willoughby Square, is getting even taller 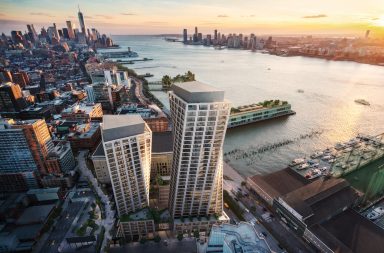 Creative brands on the move to Brooklyn

Rent the Runway is moving to renovated Dumbo warehouse