Kushner Cos. has ceded complete control of the office portion of 666 Fifth Ave. to a Brookfield fund through a 99-year lease.

No pricing was available, but the rent was front-loaded so there will be no ongoing payments to Kushner.

The family will retain its offices in the building, sources tell The Post.

But the pricing and upfront payment has also enabled the family company to pay off the remaining — and looming — debt of $1.1 billion and buy out its 49.5 percent partner, Vornado Realty Trust, for a previously agreed $120 million.

Vornado, however, will continue to own another retail condominium portion of the building as does Inditex, the Spanish parent of Zara.

As The Post previously reported, Brookfield intends to remake the 1957 aluminum-clad office tower with low dropped ceilings into a modern edifice, more enticing to today’s tech tenancies and along the lines of its dramatic reinvention of 5 Manhattan West.

It will be reskinned, with a new façade that will serve to enlarge the windows and create usable terraces from setbacks. New elevators will also be installed.

Whether the white, Isamu Noguchi lobby sculpture will remain is still unclear, and a Brookfield spokeswoman declined to comment on its fate.

Kushner Cos., the family company now led by Charles Kushner and Laurent Morali, had attempted to entirely redesign the building into a 1,400-foot-high mixed-use tower with residential apartments, a hotel and enlarged retail.

Surprise, shock! Brookfield wouldn’t comment on its prospective partner in…

But the scheme, first proposed by Jared Kushner, was set aside after he joined the White House as an aide to his father-in-law, President Trump.

It quickly became clear that his position hobbled the company’s ability to bring in any deep-pocketed foreign investors to fund the $7.5 billion project.

Since the offices were not actively marketed, as tenants moved out, the income needed to pay off the $1.1 billion-plus mortgage was also reduced.

The company was unable to refinance and was left searching for other partners, which it found in Brookfield — a partner with the Kushners on other deals.

The original plan for Brookfield to simply buy Vornado’s stake was tossed, however, as the mortgage still needed to be repaid. 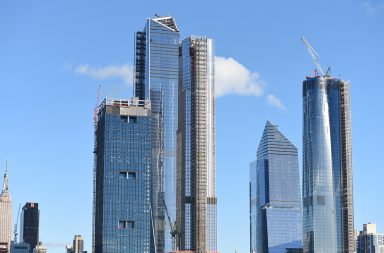