Despite what you may have read elsewhere and heard repeated ad nauseam, pioneering law firm Skadden Arps has not signed a letter of intent or even fist bumped an agreement to move from Times Square to the first of Brookfield’s Manhattan West office buildings.

We heard this weeks ago, and confirmed on Tuesday that Skadden is still examining options that do include Manhattan West but also downtown buildings and even staying put.

Skadden moved to the top of the Durst Organization’s 4 Times Square when area was still in its grittier days.

The lease signed in 1996 ends in May 2020, but its five-year renewal option requires a two-year notice. In other words, Skadden has another four big years to make up its mind about this already technologically outdated space.

Brookfield has been consistent in stating that if an anchor tenant signs this year, this first 67-story Manhattan West building on the southwest corner of Ninth Avenue and West 30th Street can be delivered in 2018.

It could take another six months to a year to build out what would be roughly 500,000 square feet in the 2 million-square-foot tower.

Facing the loss of Skadden, it looks like Durst is now making a strong play to keep it so he won’t have the entire building up for grabs. Skadden would then rotate floors while they are all updated.

Four Times Square’s other major tenant, Condé Nast, is already moving to One World Trade Center, and the Port Authority will make up to five years of its remaining lease payments while Durst tries to find another tenant.

All of the parties, along with Durst and Skadden, declined to comment or failed to return requests for comment.

As we advised in April, when Skadden’s short list was either 3 Hudson Blvd. downtown or Manhattan West, Skadden needs about 50,000 square feet for back-office space. Brookfield has that in the nearby 450 W. 33rd St., which is undergoing a façade lift with larger glass windows and will be considered part of the Manhattan West campus.

In December 2012, RXR, led by CEO Scott Rechler, completed the terms of the $420 million lease on the Midtown office building through Cushman & Wakefield from Egyptian-born billionaire Mohamed Al-Fayed’s Fosterlane Holdings.

The 630,000-square-foot building will be completely renovated “from soup to nuts,” said Bill Elder, managing director of the city for RXR, who declined to discuss anything about the transaction itself.

But Elder was more than happy to brag about the renovations. “It will be a brand-new building with a clean historical façade,” he said.

“It will be absolutely beautiful,” said Elder.

The most modern building in Rock Center, it was developed in 1947 as the home of Standard Oil.

RXR previously tapped Cushman & Wakefield to oversee leasing, and a 17th-floor marketing center will open at the end of September.

The Metropolitan Transportation Authority has renewed a lease for 34,000 square feet at 469 Seventh Ave. The deal includes the entire 11th and 14th floors.

Jodi Roberts and Josh Kuriloff of Cushman & Wakefield represented the MTA in the renewal.

The building is owned by Eric and Marty Meyer, and Dan Shavolian of Foremost Real Estate.

The Meyers, who are both principals with Colliers International, arranged the lease with an asking rent somewhere in the $50s-per-foot range. 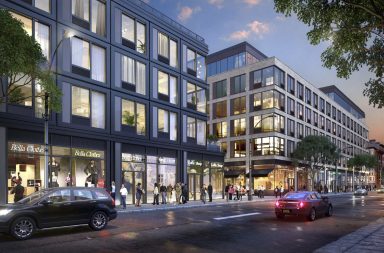