A Pennsylvania fracking mogul bid more than $1 billion for the Buffalo Bills on Tuesday — making it likely the team will attract a record sales price for an NFL team, The Post has learned.

Terrence Pegula, who owns the NHL Buffalo Sabres, is one of only two known bidders for the storied football franchise, which was put on the block last spring following the March 25 death of owner Ralph Wilson Jr.

Donald Trump also made a first-round bid for the Bills — bids were due by 5 p.m. Tuesday.

It could not be learned whether other bids were received by banker Morgan Stanley, which is running the auction.

The Bon Jovi group is expected to try to move the team to Toronto. That has made Bon Jovi Public Enemy No. 1 in the western New York city, which loves its NFL team.

“Man, f–k Bon Jovi,” legendary Bills receiver Andre Reed, who will be inducted into the Hall of Fame this weekend, told New York Magazine. “You might as well just take this city, throw it in the river, and let it go down Niagara Falls.”

Other rumored bidders were eyeing a move to Los Angeles, which has been without an NFL team since 1994.

First-round bids are usually just high enough to pique the interest of a seller.

In the Bills’ case, first-round bids were expected to hit $1 billion — or higher, a source close to the bidding said.

The $1.1 billion sale of the Miami Dolphins in 2008 is the highest price ever paid for an NFL team.

“I put in a bid in which the team would absolutely be kept in Buffalo,” Trump told The Post.

Pegula, whose bid would also keep the Bills in their hometown, declined comment.

Bon Jovi out of group bidding for Bills 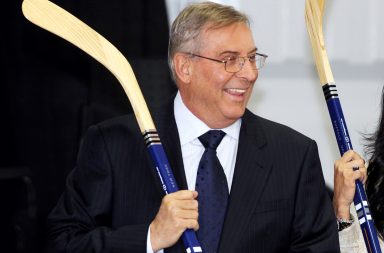